Posted on Dec 14 by editor

During this holiday season, we see pictures of happy, laughing children wherever we look.  Unfortunately, not all children get to enjoy the holidays.   When you’re a victim of sexual exploitation, and human trafficking there is little time for joy.

BSCC, Bilateral Safety Corridor Coalition assists victims of these crimes in the San Diego region, men, women and children are exploited every day

Your support will help us maintain our services and shelters for victims of labor and sexual exploitation. Your tax deductible donation will provide shelter, food and clothing for these victims.   Thank you in advance for your generous donation.

Have a wonderful holiday season.

Donations may go through Our Website Here on the Main Page

Or Our Local address

Posted on Dec 04 by editor

A new study by researchers from the Institute of Psychiatry, Psychology & Neuroscience (IoPPN) at King’s College London provides the first clinical evidence on the toll human trafficking has on mental health, including high levels of post-traumatic stress disorder (PTSD) and depression, amongst a patient population in South London.

Human trafficking is the recruitment and movement of people, by means such as deception and coercion, for the purposes of exploitation. The UK Home Office has estimated that in 2013 there were between 10,000 and 13,000 trafficked people in the UK, including people trafficked for forced sex work, domestic servitude, and labour exploitation in a multitude of industries, including agriculture, construction, and food packaging and processing. This study, published today in The Lancet Psychiatry, is the first to examine clinical and sociodemographic characteristics of trafficked people who have severe mental illness.

The researchers first identified 133 trafficked people, including 37 children, who were in contact with secondary mental health services at the South London and Maudsley NHS Foundation Trust (SLaM), and compared them to a randomly selected sample of non-trafficked patients. They used an innovative text-mining tool, the Clinical Record Interactive Search (CRIS) application, to extract data on socio-demographic and clinical characteristics, as well as history of abuse.

Dr Siân Oram, Lecturer in Women’s Mental Health at the Institute of Psychiatry, Psychology & Neuroscience, King’s College London, said: ‘Research on the mental health needs of trafficked people is extremely limited and only based on evidence from those in contact with shelter services. Our study shows that mental health services are caring for trafficked people with a range of diagnoses, including PTSD, depression and schizophrenia.

‘The complex needs of this vulnerable group – many of whom will be far from home, cut off from their families and disadvantaged in their access to education, social activities and physical healthcare – must be taken into consideration when assessing patient risk and planning therapeutic interventions.’

Dr Oram added: ‘Although interventions such as Cognitive Behavioural Therapy (CBT) exist for PTSD and depression, further research is required to assess their effectiveness in promoting the recovery of trafficked people.

‘It is also very important that mental health professionals are aware of indicators of possible trafficking and how to respond appropriately to suspicions or disclosures of this extremely serious form of abuse.’

Posted on Dec 04 by editor KNOXVILLE, TN–(Marketwired – November 05, 2015) – Human trafficking is the face of modern day slavery, not just throughout the world, but here in the United States. Innocent men, women, boys and girls lose their freedom and are exploited through sex and labor trafficking and domestic servitude. Over the years, awareness has increased where a larger population is aware of its existence, more victims are freed from enslavement and more exploiters are being held accountable. Hundreds of millions of dollars are spent to combat human trafficking and many wonder why there are never enough aftercare resources for survivors such as housing, clothing, food, job training and more. There is an increasingly united voice across our country, calling for changes in the fight against human trafficking to address the challenges facing survivors and stakeholders in this fight. Ongoing media reports cover these challenges, calling for accountability and transparency among anti-trafficking organizations. 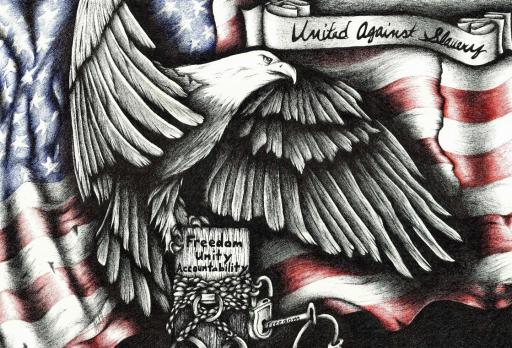 “With so much collaborative growth in the anti-trafficking movement, we have reached a vital time where we need to take a step back to evaluate where we have been, where we are and where we need to go,” says Christi Wigle, Founder of United Against Slavery. “There is so much division in our country on many issues that we have made it virtually impossible for anyone to share their opinion on something without receiving backlash. It’s time that we find common ground and become unified on pertinent issues once again. We believe the 2016 National Outreach will provide a platform to allow every adult to use their voice to impact change in the fight against trafficking.”

United Against Slavery (UAS) will join anti-trafficking leaders from across the country to host the first and largest anti-trafficking National Outreach our country has ever had. On Jan 11, 2016, National Human Trafficking Awareness Day, there will be an unprecedented online event for research and data collection among twelve stakeholders groups in the fight against trafficking. Each stakeholder group will receive a survey with unique questions.

Although the National Outreach has a focus on domestic trafficking in all 50 states, victims are trafficked in and out of the United States, so UAS will also reach out to international anti-trafficking organizations in 132 countries/areas with a custom survey. For some of the surveys, an oversight organization will email the surveys to their recipients; otherwise, UAS will send out the brief surveys to be completed between Jan 11 – Feb 11, 2016. At the conclusion of the National Outreach, the evidence-based data will be analyzed and comprehensive reports will be written to open the door to help create solutions to these challenges.

“Accountability is lacking from many agencies throughout the U.S. regarding human trafficking,” says Anna Rodriguez, Founder of the Florida Coalition Against Human Trafficking and Senior Adviser to UAS. “We have allowed it to get out of control as a result of sensationalism, inaccurate and misleading statistics usage and a lack of focus on the victims of the crime. United Against Slavery was created to realign the movement by creating uniform trainings, promoting accurate information gathering, providing technical assistance and by creating a vetting process that will assist donors in giving to front-line organizations producing verifiable results. We must move to a victim-centric approach.”

Survey leaders will be challenged to create unique questions that will be included on the survey in order to bring as many groups together as possible.

“Allowing experts to write the questions for the final survey in their field of expertise is imperative because they know the challenges being faced first hand,” Wigle adds. “We are honored to serve alongside so many credible leaders that desire significant change in the anti-trafficking movement so that we can provide the necessary help to all victims of human trafficking.”

Anti-Trafficking Stakeholders and Concerned Citizens: As preparation for the upcoming National Outreach, United Against Slavery asks for every adult to pre-register and help spread the word about this important domestic outreach. All surveys will be emailed to participants on Jan 11, 2016, National Human Trafficking Awareness Day. The 2016 National Outreach will remain open until Feb 11. The concerned citizen survey will require less than 5 minutes to complete for most participants. This is an opportunity for every adult to take a few moments to provide vital information and impact change in the fight against trafficking. Individuals interesting in having their voice heard can pre-register at Pre-Register and Stand United.